Steve Ince is back and together with Cateia Games and Frontmen Studio he plans to develop a sequel to the point and click adventure 'Kaptain Brawe' from 2010. To make that happen, they recently started a Kickstarter campaign. For us it seemed like a great occasion to chat with Steve about 'Kaptain Brawe 2' and other projects.


Adventure Corner: Hi Steve! First of all it's awesome to see you working on a new adventure game. Via Twitter you already hinted that something was going on but of course we could hardly expect a Kickstarter to 'Kaptain Brawe 2'. How did this collaboration with Cateia Games happen and whose idea was it?

Steve Ince: I was introduced to the Cateia Games guys by Damir Durovic of Reboot magazine who’d invited me over to speak at the Reboot Develop conference last month. When they said they were interested in developing a sequel with me helping them out on writing duties, I was immediately interested.

Adventure Corner: When did you first play 'Kaptain Brawe'?

Steve Ince: Like a lot of games, I took a brief look when it first came out but never had the time to play it in more depth. However, when I was approached to help with the game I of course returned to it and wished I’d played it through much earlier.

A 2D adventure with quality graphics

is always going to interest me

Adventure Corner: What was so intriguing about it that you just knew you had to jump on board for a sequel?

Steve Ince: A 2D adventure with quality graphics is always going to interest me, but one in which I can have real fun with the characters is a bonus. Although we’ll develop a good story, we’ll also layer on a lot of silliness, too. This is a game right up my street.

Adventure Corner: And what would you like to improve or see different in the sequel?

Steve Ince: The Cateia guys want to do fully recorded voices this time which will be a big improvement on its own. This also suits my style of writing because I like to write for performance. Hopefully, we’ll be able to make the puzzles a little more consistent and I know the team are already planning even better graphics and animation. We already have plans for a cool opening gameplay sequence that I think sums up the spirit of the game.

Adventure Corner: How much of the story has already been written?

Steve Ince: Not an awful lot. I have notes and ideas already, but until the funding is complete development in these areas won’t take place.

I hope that we can make it perfectly enjoyable

without having played the first

Adventure Corner: And how far will it be possible to enjoy the sequel without knowing one bit about the first game?

Steve Ince: I hope that we can make it perfectly enjoyable without having played the first, but ensure that for those who have played the first it’s a better experience, too.

Adventure Corner: Your last attempt on Kickstarter ('Sam Suede') did not end fortunate and at the moment it seems like crowdfunding in general has lost its momentum. A lot of campaigns fail, even smaller ones. Why did you and Cateia Games decide to give it shot with 'Kaptain Brawe 2'?

Steve Ince: Although I am fully behind the 'Kaptain Brawe 2' Kickstarter campaign, it is organised and run by the Cateia Games guys. They approached me when their plans were already being formed so I’m sure it would have gone ahead

One of the strengths of getting funding through KS is that it can give a company a bit more financial independence, as Revolution proved with the 'Broken Sword' campaign. Having that independence means having the ability to make games that adventure players will enjoy, which I’m sure is what we all want. Now, no one can guarantee the outcome of a campaign, but all we can do is try our best to show our genuine intentions and be as honest and open as possible.

It comes down to convincing potential backers that we can produce a great game that they will enjoy. Hopefully, we are able to do so.

Adventure Corner: Did you learn something from 'Sam Suede' which maybe helps you with the new campaign? If so in what way?

Steve Ince: I think there were a number of things going on during the 'Sam Suede' campaign that none of us had any control over, but I think the most important thing I took from the last one was to ensure that things should be stated in a way that can’t be misinterpreted.

Yes, there is a backup plan

and the game will be developed

Adventure Corner: Let's consider the worst case scenario. Is there a plan B for 'Kaptain Brawe 2' in case the Kickstarter doesn't succeed?

Steve Ince: Yes, there is a backup plan and the game will be developed.  However, without the funds provided by supportive Kickstarter backers, the pace of development will be severely reduced with an undefined end date.

Adventure Corner: During the past years you've been working on various games and not only adventures. From your experience how's it different writing for a traditional adventure than let's say a RPG like 'The Witcher'?

Steve Ince: With 'The Witcher' I only did script editing duties on the English translations, so it’s not quite a useful comparison, but all games have their unique style and a writer should always look at the nature of the game and the characters that populate it. You can’t really say “this is an adventure so I need to write like this” or that “adventure style” would take more prominence than the demands of the individual story and characters. 'Broken Sword', 'In Cold Blood', 'So Blonde' and 'Mr. Smoozles Goes Nutso' all have very different writing demands but they are all essentially adventures at their core.

Adventure Corner: Comedy versus drama, what's the bigger challenge for you as a writer and why?

Steve Ince: At their core, comedy and drama come from interactions between characters, often in conflict, that leads to a comedic or dramatic outcome. Sometimes whether an outcome gives us humour or drama depends on the context. If a person discovers their birth mother, for instance, could be incredibly dramatic or highly comical if the setup has been right.

So, to answer your question, I don’t see either as a bigger challenge because the challenge is always in writing to fit the context.

I’d love to write an adventure

set in the 'Star Wars' universe, but who wouldn’t?

Adventure Corner: Are there any other existing game IP's you'd love to work on if that possibility suddenly arises? Which ones?

Steve Ince: I’d love to do another 'Captain Morgane' game, but I’m not sure that will happen. I’d love to be able to write a 'Doctor Who' game, too. I’d love to write an adventure set in the 'Star Wars' universe, but who wouldn’t?

Adventure Corner: Speaking of other games, what's the status of your project 'Caroline's Secret'? Sadly we haven't heard much about it the past few months.

Steve Ince: I put it on hold because the ideas were in danger of running away with themselves and I needed to test a few things out before returning to the ideas. I was actually talking about the ideas with a couple of very interesting people at the Reboot Develop conference and they gave me the confidence to press on once I get these things out of the way. Hopefully, later this year.

that is helping me with some of my ideas

Adventure Corner: Is there anything else you’d like to tell our readers? 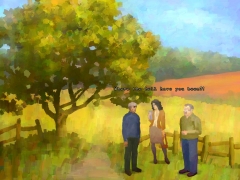 Steve Ince: I’m working on a very small personal project that is helping me with some of my ideas for 'Caroline’s Secret'. It’s called 'Like a Face from the Past' and will be more of an interactive narrative than a true game. It’s not connected to 'Caroline's Secret', but explores some similar themes. If I can pull it together it will be given away for free but should be available for both PC and Mac.

I’ve also been looking at updating 'Mr. Smoozles Goes Nutso' so it will run on a Mac but that’s proving to be much harder than I’d hoped. It may be a slow process.

Adventure Corner: Thank you very much for your time! Hopefully 'Kaptain Brawe 2' will happen next year and that we all do not have to wait so much longer for a new adventure project with your participation! 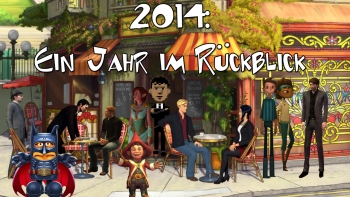 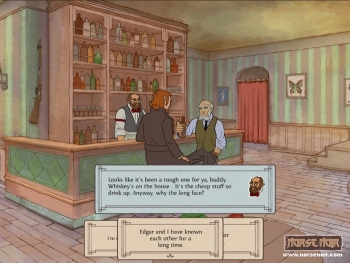 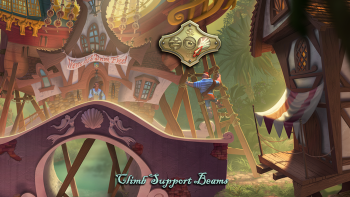 10.10.08 • In this interview Steve Ince talks in depth about his latest adventure game 'So Blonde' and the console ports. 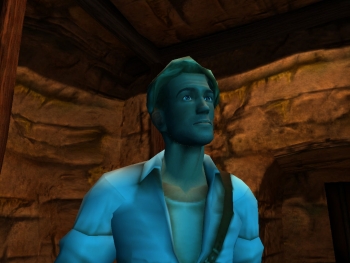