In Cooperation with Publisher Crimson Cow we collected your Questions for Pendulo Studios, who just finished their new adventure-Thriller 'Yesterday'. A while ago we collected questions from our community. Here are their answers.

First, a few general questions about 'Yesterday': After 'Runaway' and 'The Next Big Thing' it’s for the first time not a funny adventure game. How did you decide on writing something serious and what is more fun to do?

Ramón Hernáez (co-founder, co-writer and project director): Both are fun, in the sense that we love both comedy and thriller and the different challenges that they mean for us. Then, they provide different kinds of fun for the developer. Comedy is pure fun, of course: writing the jokes, piling up humorous references… but thriller has its own kind of fun: killing people, and putting a lot of swearwords are among them!

Felipe Gómez (co-founder and Lead Programmer): We’ve been wanting to turn to thriller for a long time now. There are a lot of serious adventures that we love (the 'Black Mirror' series, for example) and we were eager to put ourselves to the test. I’m happy to say that we’ve done it.


Why did you decide on using those blow-ups from graphic novels? 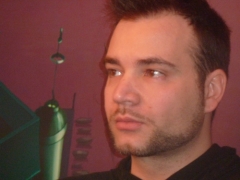 Ximo Ferrer (2D-Artist): It became very clear once the writers told us the main aspects of the story. The challenge was to make a thriller with a cartoonish looks. It seemed a bit shocking for everyone at the first moment, but then we thought: “How many graphic novels are there that tell adult stories?” We re-read a lot of our favorite ones, like Watchmen, Sin City, Maus or Persepolis, and it soon became apparent that we had found the language we’re looking for.


How do your games come to be? For instance, who had the idea for Yesterday? And did those people also write the story? 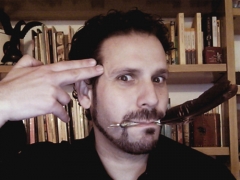 Josué Monchan (co-writer): The idea for 'Yesterday came in a bar, as most good things in life. Ramón and I had had a wonderful idea for a game that started with a massive suicide of all kinds of people, from bankers and politicians to beggars. We were striving to make a good story out of the idea, but we were stuck. And then, one day, having a drink after work, we had the main idea for 'Yesterday', and it suddenly obsessed us. Of course, it was both Ramón and me who wrote the actual game.


Who decides to go ahead and make the game from that idea? Is there a "democratic election"?

Felipe Gómez (co-founder and Lead Programmer): The real decision depends on Rafa, Ramón and me, the 3 founders, but at the same time, I don’t think we’d ever engage in a project that our staff didn’t approve of. We’re a small team of friends that have been working together for a long time, and we know that being motivated and happy with a project is not only good for the project itself, but also for our personal lives, ‘cause we must live with it during more than a year! 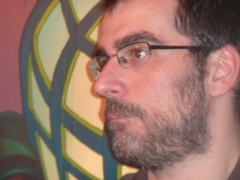 Alberto Lozano (3D artist and story-boarding): I don’t want to sound as if I wanted to flatter my bosses, but that’s one of the coolestthings of working in Pendulo: we are friends, and even if bosses decide on the most important things, we all have a fair decision rate. Every Friday we have a whole team brainstorming meeting at lunch time (that we call "brunchstorming"), and there we chat and decide about everything: new ideas for games, best candidates to join the team, or even actual features of the games themselves like plots, looks, tone…

Carlos Hernandez “KA” (3D artist): In fact we all were happy to change the comedy orientation, and the story behind 'yesterday' was so intriguing and original. Plus, I was afraid that the new project would be 'Runaway 4', because I hate Brian Basco :) 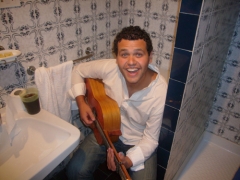 Juan Miguel Martín (musician and sound engineer): For me it was like: “Yes! Finally!” People who’ve heard my previous Pendulo soundtracks on Spotify, iTunes or the games themselves always told me that I needed to do something more gloomy. And it’s true. Comedy and thriller demand for very different things when talking about music, and I really wanted to explore my dark side as a composer. Now that I’ve explored them with 'Yesterday', I feel I’m a much more complete musician.


Are you planning on developing more of those serious games in the future or are you headed for more funny once again?

Ramón Hernáez (co-founder, co-writer and project director): We’re happy with the path that we’ve started with 'Der Fall John Yesterday', and we are planning another adult adventure called 'Day One'. It won’t be so gloomy, but it’ll be more mature. But that does not mean that we will do comedy no more. We have plans for some casual games with a humorous tone, besides 'Hidden Runaway', the hidden object game based on our most know IP that will hit App Store this summer.

Rafa Latiegui (co-founder and art director): Let me ask to both questions with just a single word: “Wow!” Why are there so many people right now asking for that? To be honest, we’d never thought about it, but there seem a lot of people interested. We have a lot of other priorities right now and we’re such a small team, but it could be great getting both games to run on present devices, translating them into the most important languages (including German, of course) and making them available to fans.

Ramón Hernáez (co-founder, co-writer and project director): We have plots for both of them. The one for 'Runaway 4' places the action in Europe – mostly Italy, for the mafia thingie – and 'TNBT 2' should have the world of sports as background. However, none of these games is planned for development for the moment. Before we want to do different things, explore new ideas, new paths.


In 'Runaway - A Twist Of Fate', why was there no reunion of more characters from previous 'Runaway' games, especially part 1? (it would have been THE opportunity, to meet the transvestites again, for example )

Josué Monchan (co-writer): It’s funny that you mention the drag queens, because they were in the 'Ratof' script for a long time. In fact, we wanted them to be in a Berlin cabaret – yes, a topic, but most of Runaway makes fun of well-established topics. Brian would have to disguise himself as Joel Grey in the movie in order to hide from the villains. Sadly enough, that juicy and funny chapter did not make into the final version of the script. 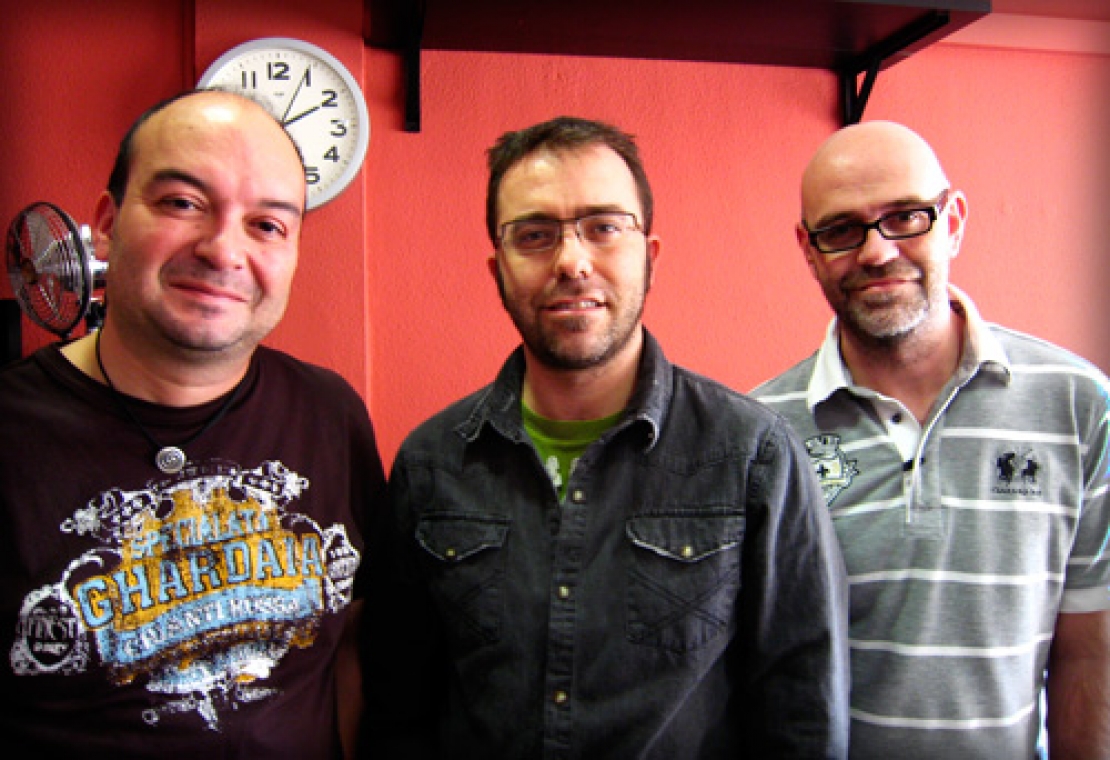 Do you know the gamescom trade show? Are you usually there or do you rely on your publishers to represent you?

Felipe Gómez (co-founder and Lead Programmer): Of course we know it! We were there last year and had a very good time in the Flashpoint / Crimson Cow booth, introducing the game to journalists, meeting other developers. I still treasure the dinner that josué and me shared with the Crimson staff and the King Art people… Critter included! I just can’t remember the name of that wonderful Italian restaurant in Köln… but I’ll never forget the pesto ravioli that I ate there!


Apart from interviews like these, how do you usually get in contact with fans? And how was the feedback to 'Yesterday' that reached you? Is there a difference in the feedback from German gamers?

Rafa Latiegui (co-founder and art director): Some years ago it was almost impossible to keep the fans contact. We could only do it via mail and it took a lot of time! But now it’s different thanks to the social networks. We get a lot of real-time, first-hand fan feedback in our Facebook and Twitter addresses (PenduloStudios and @pendulostudios respectively) and we are learning a lot from the people that, ultimately, allows us to earn our lives doing what we love to do. The feedback on 'Yesterday' that fans reflect in the networks is basically very good, but most possibly that’s because they’re very good fans :). Unluckily, by the time we answer to this question there still hasn’t arrived a lot of feedback from Germany, but we hope it to be at least as good as the rest of the world’s.


Do you see your future in adventure games, or do you want to cater to other genres as well?

Ramón Hernáez (co-founder, co-writer and project director): We’ll keep on doing adventure games as long as fans want, and make it the basis of our work, but at the same time we don’t want to restrict to it. Casual adventure and hidden object games are two genres very attractive for us, because they have same spirit, but change a bit the playability and the player expectations. Besides, developing 'Hidden Runaway' for iOS is turning out to be quite fun, so we’ll try to complement our good-old like adventures with smaller projects like that.

Josué Monchan (co-writer): The upcoming of tablets as new devices to play adventure is one of the things that will ensure that we stay in our favorite genre, because they adapt perfectly to the adventure ergonomics. I guess Steve Jobs said: "What can I do to help adventures?", then he invented the iPad. Let’s see what happens with 'Yesterday' when it’s released for iPad and iPhone this summer.


What are your favorite games (that are not made by you)?

Ramón Hernáez (co-founder, co-writer and project director): 'The Secret of Monkey Island', 'Day of the Tentacle' and 'Space Quest'… mostly for sentimental reasons.

Rafael Latiegui (co-founder and art director): I’d go for 'Monkey Island 2: Lechuck's Revenge', 'Day of the Tentacle', 'Indiana Jones and the Fate of Atlantis'… and a lot more!

Felipe Gómez (co-founder and Lead Programmer): The first two 'Monkey Islands' and 'Indiana Jones and the Fate of Atlantis', too. 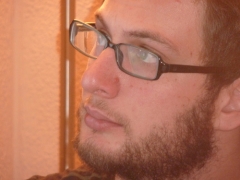 Javi García de la Cita (programmer): That goes for our not-so-young bosses… but let me represent the rest of the –younger- team to talk of some of our favorite modern adventures: 'Machinarium', 'Heavy Rain' (though there’s a bit of controversy among the staff), 'Black Mirror 3', 'Gray Matter', 'The Book of Unwritten Tales', 'Blackwell Deception', 'Gemini Rue', Telltales 'Sam and Max' and 'Dear Esther', if it counts as an adventure.


Did / do you follow the kickstarter campaigns of DoubleFine, Pinkerton Road and Al Lowe? If so, what do you think of them, and did you maybe even pledge contributions as well?

Josué Monchan (co-writer): We did! I even offered myself to Jane Jensen as Spanish translator. I was one the weirdos that voted for the 'Anglophile adventure' in the poll, but I’m sure that 'Moebius' will be a wonderful game too. As Time magazine says, we think that Tim Shaffer changed games funding forever. The relationship between creator and fans has changed a lot during the years, and crowdfunding is just a proof that fans are – or at least, should be – the rulers of the gaming industry. Besides…who can deny anything to a man who convinced the Cookie Monster to make a project together :) ?


Thanks for taking the time to answer all these questions. Maybe you have some closing words you want to tell your German fans?

Ramón Hernáez (co-founder, co-writer and project director): Three things: keep playing adventures, enjoy 'Yesterday' and – even if you don’t – please tell us. As Rafa said, now we have Facebook and Twitter to hear the fans, so speak out loud! Just don’t put too many swearwords :)


We do wish you all the success with 'Yesterday' and your upcoming projects!

Rafael Latiegui (co-founder and art director): Many many thanks to you for the interview! And mountains of good luck!!! 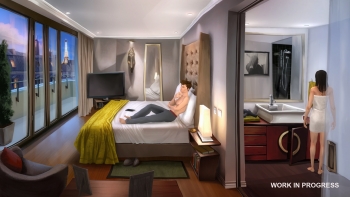 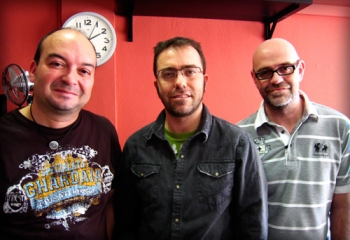 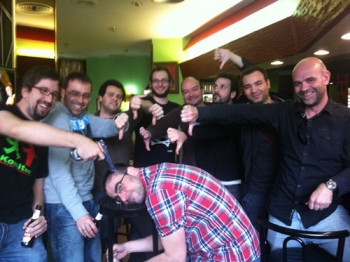 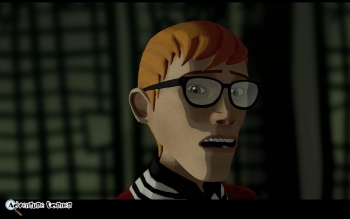