Frogwares Studios is actually working on 'Sherlock Holmes: Crimes and Punishments'. We talked to Olga Ryzhko from the Studio about the seventh Sherlock Holmes-Game and the changes it brings to the Series.

Adventure Corner: Hello and thanks for taking the time to do this interview! Please tell us what is 'Sherlock Holmes: Crimes and Punishments' about?

Olga Ryzhko: Well, first of all thank you so much for this opportunity to reach out to Adventure Corner readers! Even if we do not speak German here, we still follow some discussions at the forums and are always excited to see your opinion on all and any Frogwares things. I remember the cheeriness when 'The Testament of Sherlock Holmes' was released and your heads-up for the game. This is very much appreciated by every single member of the studio.

The new Sherlock Holmes game, 'Crimes and Punishments', is going to be the seventh game in the series. However, again, it’s a stand-alone product with its own storyline and its own intrigue. Of course, we plan to keep the intrigue as much as possible but I can say that we continue experimenting with allotting you the abilities and skills of the greatest detective. We want you to truly become Sherlock Holmes and lead your own investigations.

I’d say that 'Crimes and Punishments' is a more sophisticated, challenging and even mature game compared to the previous titles. We want to immerse you in the life of Sherlock Holmes, to realize his motivations and to assume the responsibilities that may influence people’s lives.

On a general note, 'Sherlock Holmes: Crimes and Punishments' is an Investigation Game; I now refer to the whole new genre rather than good old adventure games. It is filled with new astonishing features, ones we never had before and I hope it will bring a whole new experience to the players.

Adventure Corner: There will be eight cases in the game. How long would it take to solve them? Will it be more like 'Testament' or more like the 'CSI'-Games?

Olga: It is a very different game; 'The Testament of Sherlock Holmes' was an important benchmark for Frogwares. It was meant to become our biggest and most incredible game and we worked really hard to make it happen. There were ideas that we had to refuse due to some technical limitations or they simply did not fit our vision of the game. At the end of the day we’ve invested a lot in it and we are happy with the game. We still follow some discussions on the Internet; there are new reviews appearing, comments from the players and press. I’ll say that one more time – The 'Testament of Sherlock Holmes' is our biggest and most incredible game; until 'Crimes and Punishments'.

The new game is in production now and we have a lot of work ahead, but check the screenshots and the tech demo. It promises to become an incredible piece of art. It may sound a bit self-conceited, but Frogwares is not a young ambitious studio; ambitious – yes, ambitious and experienced.

So you are right, we plan to offer 8 different cases that are not directly connected to each other. You will be investigating murders, disappearances, spectacular thefts, etc. How long would it take you to investigate each case? I’d say around hour but it really depends on your investigative skills.

Adventure Corner: Why did you choose to split the story into more cases?

Olga: 'Crimes and Punishments', you will have choices to make. You are going to decide who is guilty and why and what you do with this knowledge. You will assume the responsibility of every single choice you make. Hence there is no point in having one big story with four different endings; or four different games. It works better with short cases instead: you solved a case, you’ve made the decision and you are ready to move further. You do not have to memorize every aspect of the game that may or may not be important in the end.

Adventure Corner: Will the cases effect each other? For example: If I miss an object or information in Case 1 will there be Changes in Case 3 or 4?

Olga: These are stand-alone cases. Again, you solve the case, you’ve made a choice and you proceed further to the next exciting investigation. A missed object or a piece of information won’t influence the gameplay of the next case but it will modify your overall personal story inside of the game.

You will be able to ruin Sherlock Holmes career

Adventure Corner: Does the player have to bear consequences of the deduction? For example: Will there be different endings or a changed behavior of the NPCs? 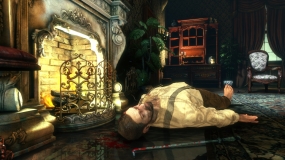 Olga: You will be able to ruin Sherlock Holmes career or to sign the death penalty of the innocent… An echo from previous cases will somehow resonate afterwards.

So, we are going to have up to 12 different endings per case. This will modify the NPCs behavior depending on if you are right or wrong while solving the case and depending what kind of moral choice you made in the end. Sounds impressive, doesn’t it?

Adventure Corner: Although 'Testament' already looked very good, 'Crimes and Punishments' is now being developed with the 'Unreal Engine 3'. Will this bring changes to the game except for the graphics?

Olga: Thank you! 'The Testament of Sherlock Holmes' is indeed a very beautiful game and we can be proud of its graphics. With 'Unreal Engine', we switch to even more magnificent graphics; we are using new typed of cameras, new effects, etc. Apart from that, UE gives us freedom and flexibility both in terms of development and gameplay. We can enhance the game with features that we were not able to have with our home-made engine.

Adventure Corner: Currently it seems to be hard making Adventure Games besides Kickstarter. The more remarkable when one adventure series creates so many sequels as Sherlock Holmes! How satisfied are you with the success?

Olga: It’s been a relatively short time that I've been with Frogwares, but I doubt it was easy to make games 10 or 20 years ago. When Frogwares was started as a studio, they have been learning to make games at the same time they were doing them. Surprisingly, it worked! And it still works :) 'The Mystery of the Mummy' was a big success, 10 years after the game release it is still selling very well. 'Sherlock Holmes The Awakened' is now considered to be among the classics of Adventure gaming. I recall someone’s comment about 'The Testament of Sherlock Holmes', classifying the game with the classics two months after the game release. Do you think it makes us happy? Hell yeah! We are happy to do what we LOVE doing and we are happy to see the demand for our games. Sometimes we receive very personal emails from players sharing the feelings our games give them. We print some of them, share them with the whole team (its 80+ people here), read them to our families. These are absolutely beautiful moments to live and to feel.

One ought to give dues to Kickstarter, though. It is a terrific idea and it gives so many opportunities to developers. We actually used its European clone for our upcoming 'Magrunner: Dark Pulse' game, the first-person puzzler that will arrive very soon.

Adventure Corner: What do you think makes your Sherlock Holmes this successful?

Olga: :) I’d like to hear that from the players, from you Tobias, and from the readers of Adventure Corner.

Adventure Corner: Which other games inspire you?

Olga: All the good ones. We are gamers here, we play a lot of games; we become fans of some of them, getting back to them from time to time or replaying them in a couple of years. Some games influence us more than the others. So many men, so many minds - there are 80 people in Frogwares and its not only adventure games we play here.

Adventure Corner: Were there things in 'Testament' that you weren’t satisfied with in retrospect and that should work better in 'Crimes and Punishments'? If so what was that?

Olga: Let’s be honest, despite how hard we tried, 'The Testament of Sherlock Holmes' is not a perfect game. It has its defects in the technical part; there are some drawbacks in the story. We learn with every new game we make; 'Crimes and Punishments' is a big step for us and it is a result of the previous games we did.

Adventure Corner: Good luck with your new Sherlock Holmes and thanks again for your time!

Olga: Thank you! And on behalf of the team, thanks for letting me share this with you. Speak to you soon :) 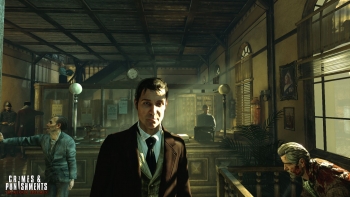